Everyone is entitled to protection and help

International issues It is a matter of humanity and decency. That is what the LO Executive Council writes in a statement in response to the refugee crisis. All EU countries must share responsibility for people fleeing from war and persecution. In the same way all Sweden’s municipalities must share the responsibility of receiving refugees. 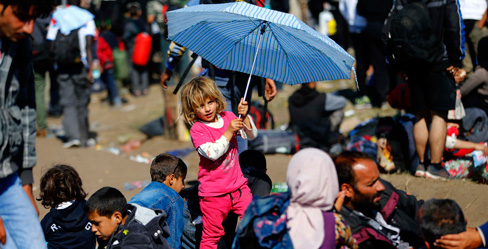 Statement by the LO Executive Council concerning the refugee crisis

We are in the midst of a refugee disaster that has been going on for a long time and is just getting worse. Desperate people are fleeing from their homes, despite being fully aware that this puts them in mortal danger.

There are more than 60 million displaced people in the world today. Most of them in their own countries. Only a small proportion flee to Europe. The EU has for far too long been a project primarily for facilitating the free movement of market forces. Now the focus must be on solidarity and how to tackle the present situation.

It could just as easily have been us. 75 years ago the Second World War was raging in Europe. Not far away, but in our neighbouring countries in the Baltics, Finland, Norway and Denmark. People were persecuted and murdered than as now.

Everyone is entitled to protection and help. It is a matter of humanity and decency.

All EU countries must share the responsibility for refugees from war and persecution. It is completely unacceptable that some countries receive hardly any refugees or none at all. A compulsory distribution mechanism is needed. It also means that the Dublin Regulation ceases to apply.

We workers assume that broad political consensus on refugee policy will be created, with clear demands for fair measures for both the countries of Europe and Sweden’s municipalities.

LO and its affiliates must also do what we can. As a direct contribution the LO Executive Council has decided to give money to the UNHCR for its work with refugees. Another part is to create possibilities for newly arrived immigrants to enter the labour market as quickly as possible. We are ready to cooperate to improve the integration of people arriving here.

Ultimately it is a matter of values, of how we see each other. Our solidarity and idea of the equal value of all people must not stop where Sweden ends in Smygehuk or Treriksröset. Solidarity has no borders.

Message of solidarity to Ukraine