International issues Two challenges are facing Europe today: fighting the high unemployment rate and social dumping, as well as creating more jobs. What is the French-Swedish approach on how to achieve this ? 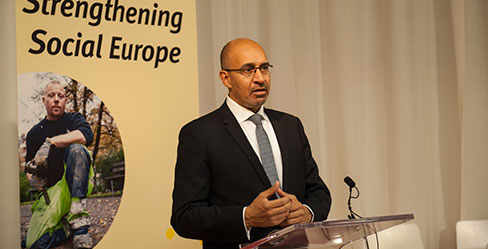 On the occasion of  his visit to Stockholm,  the French Minister for European Affairs Mr Harlem Désir, met with LO President Karl-Petter Thorwaldsson at a seminar arranged by the Swedish Think Tank Tiden, in order to discuss possible solutions to the challenges facing Europe.

The challenges are of both economic and social nature: persisting high unemployment in most EU countries, imbalance between capital and labour, increasing gaps between those in employment and those unemployed.

However it is a fact that Europe has never been richer than it is today. And yet there are not  enough resources for all.  The obvious reason for this  is social injustice and unfair distribution;  those who earn the most also get the most, which results in increased gaps.

The fight against unemployment and injustice is also the best means to combat the racism which is spreading everywhere in Europe today.

EU’s social model needs to be strengthened. More people need to get employed, and more need a decent job. Bringing in the social dimension in all EU policy implementation is a prerequisite for a future where citizens feel trust in the EU project.

- LO Sweden is a strong organisation which has defended workers’ rights for over a century,  and also succeeded in negotiations with the employers to create a modern, dynamic and innovative economy, Mr Désir said. At the same time there are solid social security schemes, especially for workers and families.  This is what the European project is about. We must ensure the quality of jobs and the quality of social security.  Economic growth must be combined with a social agenda.

Watch the seminar  at LO PLAY