Green transition the theme of the World Day for Decent Work

International issues Sustainable transition is a vital issue for tomorrow’s society. If we cannot reach the environmental goals, economic and social sustainability are jeopardised. Our jobs are at stake! 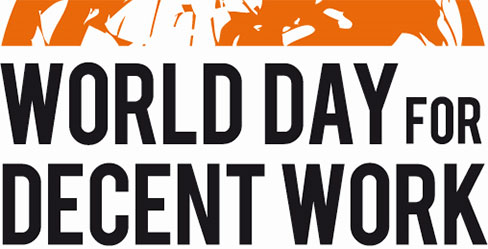 Today trade union organisations all over the world mobilise for awareness-raising  for Decent Work.

-  Decent Work is about jobs with fair, decent conditions for all across the world, says Keth Thapper, International Secretary at LO Sweden.  Decent conditions include fundamental human rights in working life, such as livelihood security, full employment and good working environment.

- The key role of the social dialogue, improved gender equality and the observance of the ILO conventions are also relevant in this regard.

A question of survival

Why would trade unions work on climate and environmental issues?  Shouldn’t the unions instead devote their time to the job issue, to union rights and social equality ?

- Yes, that is exactly what we do, replies Loa Brynjulfsdottir, head of the international department of LO Sweden. This is precisely why we work for a fair, green transition.  Because it is about future jobs and global justice.

- In the globalised world we are part of,  it is necessary to intensify international cooperation, if we want to meet the challenges and counter the threat  which we have ahead of us and which will harm our members.  The climate and environment issues are of a cross-border dimension.

The ITUC, the leadership of which LO is part of, has intensified its activities in the field of environment and climate over the last ten years.   Focus has been on the need for fair green transition and on influencing decision-makers globally to raise the level of ambition in climate negotiations.  The Congress of the ITUC held in Berlin in May decided that sustainable jobs are to be one of the prioritised union goals during the coming four years.

The ITUC Congress also launched the campaign Unions4Climate which LO has signed up to. The campaign’s purpose is to increase trade union commitment in the fight against climate change that risks to erase jobs in many parts of the world.  Another goal is to put pressure on the world’s decision-makers, with a view to the United Nations’ Climate Change Conference COP21 in Paris in December 2015.

- Our aim is to reach an ambitious and binding agreement under the United Nations Framework Convention on Climate Change, says Loa Brynjulfsdottir.

A continued increase in the Earth’s temperature risks to result in an acceleration of weather catastrophes such as floods, cyclones, draught and rise in sea levels.  These catastrophes especially affect poor countries and often cause loss of jobs, ruined livelihood and profound suffering.

- To the largest extent, the victims of the climate crisis are women who live in poverty in the Southern half of the globe. They are therefore also the ones who would be the most helped by forceful measures to stop climate change, says Loa Brynjulfsdottir.

To work for climate justice must be an integral part of trade unions’ global solidarity activities.  As regards LO, this means for instance that we support Sweden’s climate goal of zero net greenhouse gas emissions.

- Climate change poses a threat to our welfare and democracy.  Our economic system must be restructured in such a way that it takes into account environmental considerations, says Johan Hall, research officer at LO.

- Rather than tackling the catastrophes caused by the climate crisis, it must be smarter to use our resources to a green transition and a devlopment of our societies. A transition of this kind requires extensive investments but it can also generate more and better jobs. If we are to succeed in this requires the contribution by all, but a particular responsibility for correcting the deficiencies in today’s economic systems lies on politicians and corporates.

LO wants Sweden to invest in rail and other public transport.

Deregulation has increasingly elevated administration costs, significantly narrowed the scope to foresee any deficiencies, put the responsibility on individual entrepreneurs and made it much more difficult to plan where and how the important work needs to be done, which has resulted in extensive deficiencies in the railway maintenance.

Furthermore, LO wants Sweden to invest more in research and development of electric vehicles. We also work in the EU towards binding goals to reduce emissions, to increase the share of renewable energy and to enhance energy efficiency.

The 2012 LO Congress decided that LO shall produce a renewed action plan for how climate and environmental issues should be addressed in the workplace.

- Support measures are important and social partner cooperation is a necessity. Climate policy measures are also often linked to other development cooperation in enterprises and operations, which necessitates a comprehensive approach in terms of measures.

- This means that a clear and sustained commitment from unions, districts and individual trade union representatives is needed to launch climate and environmental initiatives in the workplace. We hope that the efforts to develop a trade union guide that are now in place will contribute to such a commitment, says Ingela Edlund.