Employment conditions Sustainability and fair conditions are to distinguish the Olympic Games. It is important to show that major international events can in all aspects be built on the respect for human rights for all. 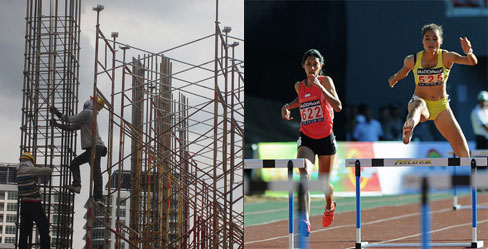 LO and The Swedish Olympic Committee have signed  a joint agreement on the respect for labour rights in connection with international sports events.

Discussions on a joint agreement have been going on since December 2013.  Karl-Petter Thorwaldsson, President of LO Sweden, is also President of the Human and Trade Union Rights Committee of the International Trade Union Confederation (ITUC) and he is active in this issue.

LO wants to provide a good example of  fair conditions

The contribution of many is needed in the realisation and accomplishment of Olympic Games. Workers who build the stadiums, who ensure transports of competitors and spectators, clean the facilities, serve food and many more. Awareness must be raised of their working environment and fair conditions for all must be ensured.

- LO executive council decided in the autumn of 2013 that LO would support an application by Stockholm to host Olympic Games, if an greement on fair conditions could be reached.  We thereby also hope to contribute to a global standard for future international sports events, says Loa Brynjulfsdottir, Head of the International Department of LO. The ambition is to provide a guiding example on how all components of a large international event can be built on the respect for human and trade union rights.

- The instruments are already there, in the form of principles agreed internationally, such as the ILO core labour standards, the OECD Guidelines for Multinational Enterprises and the UN Framework on business and human rights, Loa Brynjulfsdottir explains.  These form the basis of our work.

The agreement between LO and the Swedish Olympic Committee